DO YOU REALLY NEED A GUN BELT?

Don’t Underestimate the Importance of a Good Gun Belt

One of the most common means of concealed or openly carrying a firearm is “on the hip” or, rather, somewhere on the waist. Wherever you decide to carry on your waist, it is important to have a good holster that is well fitting, comfortable, secure, and easy to access. Lots of CCW-ers put a lot of time, effort, and money into finding the right holster but overlook another piece of equipment that is equally (or more) important: the belt.

So, do you really need a special belt to carry your firearm?

Like everything else, the answer is completely subjective and it will depend on what you are carrying, where you carrying it, and how you are carrying it. However, a good number of the issues that concealed carriers run into (which can sometimes convince them to stop carrying) can be easily solved with a belt upgrade, which is hard to believe until you have tried it. What Kind of Problems Can a Gun Belt Solve?

The issues that having a good gun belt can solve covers a lot of ground – many of which new (and even experienced) carriers may not even associate with the belt they are using. This can be anything from back and hip pain to comfort and concealment issues arising from the firearm pulling down all or part of the pants or allowing it to slouch outward and print badly.

I started out toting some decently sized pistols when I first began regularly carrying a firearm – from all-metal Berettas that tip the scale at nearly three pounds to the chunky Ruger P-series of the early 2000s. Now the biggest thing I will normally carry is a Glock 19 that comes in just shy of two pounds loaded, although it is often something smaller and lighter. While one pound doesn’t sound like a lot in theory, having it suddenly and lopsidedly attached to one side of your body all the time can quickly wear on you and throw things out of whack.

Most of the problems that stem from poor gun belts come about because of the sagging and flopping allowed by weak belts. As far a concealment goes, your pistol and holster sagging outward or dragging that side of your pants down can make it pretty obvious what you have going on there. It also causes comfort issues as the top part of your gun flopping out can cause the muzzle do dig into you and having something pulling part of your clothing out/down can be just plain uncomfortable.

How we deal with those problems can often cause other issues as well. Problem: regular belt allows holster to flop or sag. Solution – tighten the belt! When I started carrying those behemoth pistols with a regular belt, that’s exactly what I did; I tightened my belt enough that the pistol wouldn’t sag. Unfortunately, not only did that smash the firearm deeper into my fleshy hips, it had to be tightened to the point that it altered the way I could move, sit, and even walk – which led to having a sore back. Many simply attribute the sore back to the weight of the gun when it is actually the fault of a belt and how they are using it. A purpose-built gun belt can support a firearm and holster without over-tightening, allowing for more comfort and better concealment. A purpose-built gun belt can support a firearm and holster without over-tightening, allowing for more comfort and better concealment.

Comfort and concealment are not all that gun belts bring with them – they also perform a functional duty as well. Thin, cheap belts can allow a holster to move in unpredictable (or predictably negative) ways. This goes more for paddle holsters and holsters with clips, but can also affect holsters with belt loops or slots. Whatever means of attachment a holster uses, they need something to bite onto – not just to keep the holster from moving around throughout normal use but, more importantly, to keep the holster from coming out with the pistol when drawing.

What is a Gun Belt? 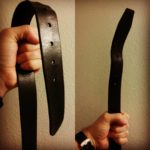 Technically speaking, whatever belt you use to wear your holster is a gun belt, but not all belts are created equal. A belt can range anywhere from a piece of Huck Finn twine tied around your waist to multi-layered hand crafted Amish leather belts to expensive designer belts, and they are all going to perform differently. Thankfully, the answer lies somewhere between a 21¢ piece of paracord and a thousand-dollar Gucci lizard belt.

Purpose-built gun belts will have some combination of features that will help with the following:

While regular leather or cloth department store belts might do just fine at holding up your pants, they often just can’t do what is required of them in the practice of carrying a firearm.

How do Gun Belts Solve Those Issues?

The types of gun belts available are not quite as varied as “fashion belts,” but there are a few different styles and means of achieving their goals – most of which boils down to making the belt stiffer.

An easy first step is to simply use better materials. For instance, not all leather is created equal – it can range from full grain (the strongest, most durable, and hardest to work) to top grain (the #2 grade, a slab split off from full grain leather) to “genuine leather” (the leftovers after all the good full grain and top grain leather has been picked through). A belt doesn’t have to be crafted from a hunk of animal hide, however, and believe us: there is a huge difference between that cotton double-d-ring belt that comes with the Walmart cargo shorts and a layer or two of ballistic nylon. Some gun belts provide the necessary benefits through sheer brute size – by being constructed from extra thick leather. For instance, the limp belt in the photo above – by workwear company Dickies – is a fairly “heavy duty” product by department store belt standards.

The Dickies belt is approximately 1/8″ thick (6oz) “genuine leather.” On the other hand, leather gun belts are frequently made from 14oz leather (7/32″ thick) and it is not uncommon to see them as heavy as 18 oz (over 1/4″ thick)!

That thickness is even often coupled with laminate construction – putting together two or more layers of the material, often with an adhesive between them and multiple stitches along the length of the belt. When properly done, as with engineered plywood, this can yield a stiffer product.

The last common way to transform a regular belt into a gun belt is by including a reinforced core – often a strip of stiff material sandwiched between the layers of the belt, although the stiffener may be any of the layers, including an exterior layer. The stiffener can be an array of materials, but is often a metal (like spring steel) or nylon rib, as in the photos below. 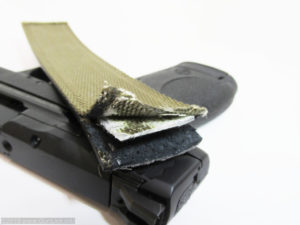 So, Do You Really Need a Gun Belt?

If you are going to be serious about carrying a firearm on your person, we think you owe it to yourself to at least try one out, especially if you are running into any of the problems mentioned above like poor concealment, pack pain, or having to frequently adjust your firearm, holster, or pants. Although they can cost a bit more than a cheap, flimsy belt from the department store, you will be asking more out of it than just holding up your pants.

The GunLink team has carried with belts that run the entire gamut from cheap cotton web belts to standard leather belts to purpose-built gun belts of various materials and it is difficult to overstate what a big difference having quality gear makes. You decided that you want to carry a deadly weapon for protection, you invested in the firearm, you invested in a good holster – why cheap out on the piece of equipment that provides the foundation for carrying all of that?

Check out our reviews of Big Foot Gun Belts and Kore Essentials Leather Gun Belts and Tactical Gun Belts,although there are numerous makers out there. Many companies even offer money-back trial periods from 7 to 30 or more days to try out the product and see if it’s right for you.